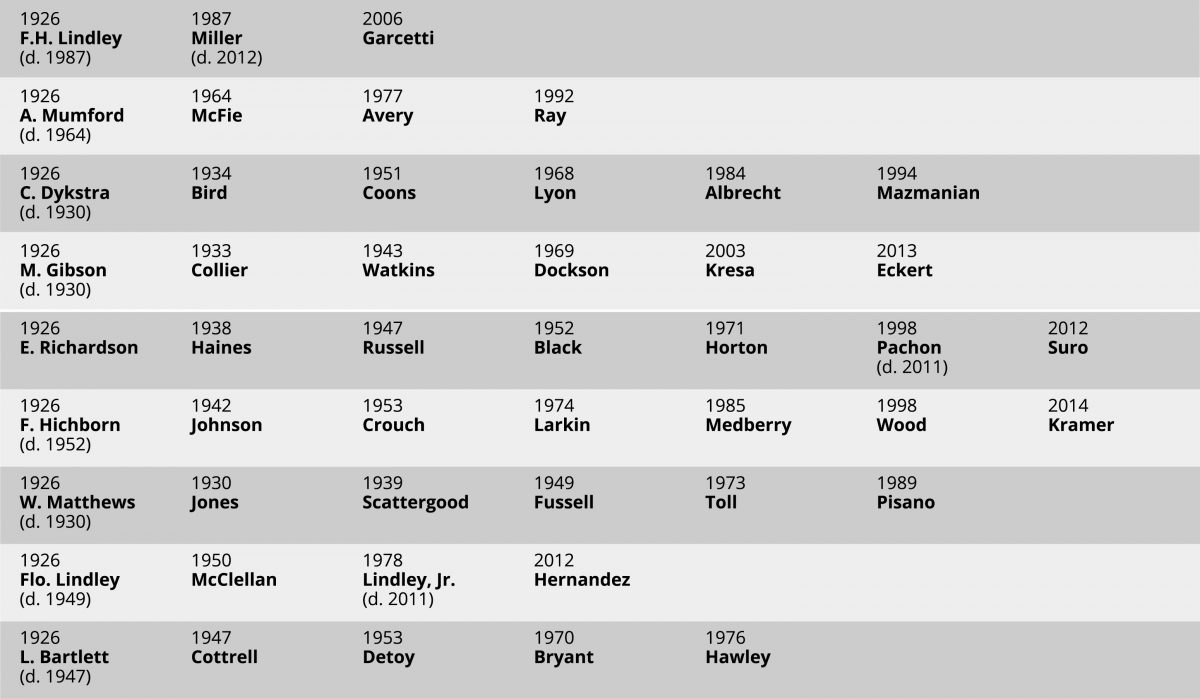 Board members past and present

Charles Detoy . Vice Chairman of the Board of Coldwell, Banker and Company, served on Los Angeles Real Estate Board and Los Angeles Chamber of Commerce. Died 1970

Robert R. Dockson . Trustee Emeritus, former First Vice-President and Chair, Finance Committee of the Haynes Foundation. A leading businessman and academic in Los Angeles for many decades, he retired from active service on the Board in 2003. Died 2013.

Robert A. Eckert . Current Trustee. Chairman Emeritus of the Board of Directors of Mattel, Inc., former President and CEO of Kraft Foods, Inc., and member of the distinguished Boards at several for-profit and non-profit organizations and institutions.

Gil Garcetti . Current Trustee. A photographer, speaker, and television consulting producer since 2002. He has published six photo books, gives speeches and presentations on his photography and on career change, and has been the consulting producer for television shows, The Closer and The D.A. Previously served as the Los Angeles County District Attorney for eight years and was a member of that office for 32 years. He was President of the Los Angeles City Ethics Commission for four years.

Philip M. Hawley . Current Trustee. Former Chair and CEO of Carter Hawley Hale Stores, he is the recipient of numerous business and academic awards. Mr. Hawley is trustee emeritus of the Huntington Library and Art Gallery, the University of Notre Dame and the California Institute of Technology.

Reginald D. Johnson . MIT-trained architect who withdrew from private practice to devote himself to slum clearance and urban redevelopment. Died 1952.

Robin M. Kramer . Current Trustee. Executive director of Reboot, Senior Advisor for the Annenberg Retreat at Sunnylands, and chair of the Board of Trustees of Pitzer College. Former Chief of Staff to both Los Angeles Mayor Antonio Villaraigosa (2005-09) and Mayor Richard Riordan (1993-97).

Kent Kresa . Former Chairman and CEO of Northrop Grumman. Prior to joining Northrop Grumman, Mr. Kresa served with the United States Defense Advanced Research Projects Agency. Mr. Kresa serves on the boards of directors of the Fluor Corporation, the W.M. Keck Foundation, the Music Center Foundation and other non-profit organizations. Mr. Kresa also serves on the Board of Trustees of the California Institute of Technology.

Frederick G. Larkin, Jr. . Chairman of the Board, Security Pacific National Bank. Director of Getty Oil and other companies and cultural organizations in Los Angeles. Died 1984.

F. Haynes Lindley, Jr. . President Emeritus of the Foundation, Mr. Lindley is the grand-nephew of the Founders. He worked as a litigator for the Department of Trial Counsel of the State Bar of California and as a Deputy Public Defender in Los Angeles County before shifting to private practice as a lawyer and investor. Mr. Lindley has served on the Board of Directors of the Marin Agricultural Land Trust and as a Trustee of the Claremont Graduate University. He is a member of the Board of Directors of the Family and Children’s Law Center in Marin County. Died 2011.

E. Wilson Lyon . President, Pomona College, Professor of History at Pomona and Colgate University. Prolific writer, involved in many educational organizations and concerns. Served as Chair, Committee on Research and Grants for many years. Died 1989.

William B. Mathews . Original Trustee. Early friend of Founders. City Attorney for Los Angeles and attorney for Department of Water and Power. Died 1931.

Daniel A. Mazmanian . Current Trustee and Professor of Policy, Planning and Development at USC. A leading scholar and publisher in the fields of American politics, environmental policy and policy implementation, he held posts at the University of Michigan, the Claremont Graduate School, Pomona College, and the Brookings Institution prior to coming to USC.

Chauncey J. Medberry, III . Chairman of the Board, Bank of America. Trustee at Pomona College, Hospital of the Good Samaritan, Caltech and the Rand Institute for Civil Justice. Died 1997.

Donn B. Miller . Trustee Emeritus. Former partner in O’Melveny and Myers. Mr. Miller served as Foundation President, 1996-2004. He is a former board member of the California Chapter of the Nature Conservancy, the James Irvine Foundation, the Occidental College, and the Marlborough School. He retired from the Foundation in 2006. Died 2012.

Harry P. Pachon . President, The Tomas Rivera Policy Institute, a national research center on public policy and Latino issues. Dr. Pachon is a leading scholar in the field of U.S. citizenship and Latino politics, and serves as Professor of Political Science at the Claremont Graduate University and Pitzer College. He also serves as Chair of the National Association of Latino Elected and Appointed Officials Education Fund and has served as a Presidential advisor on Hispanic and educational issues. Died 2011.

Jane G. Pisano . Current President and Chair of the Foundation’s Committee on Research and Grants. Dr. Pisano serves as President and Director, Los Angeles County Museum of Natural History. Formerly, she was formerly Senior Vice President for External Relations at USC, and as Dean and Professor of USC’s School of Public Administration, as well as President of the Los Angeles 2000 Committee and Director of Olympic Programs at Times Mirror Company. Dr. Pisano is active on many boards and served as Chairman of the Board of the California Community Foundation.

Ethel Richardson . Original Trustee. Friend of Founders who was active on State commissions and in the women’s suffrage movement. Trustee at Occidental and Scripps Colleges.

Roberto Suro . Current Trustee. Mr. Roberto Suro holds a joint appointment as a professor in the Annenberg School of Communication and Journalism and the Sol Price School of Public Policy at the University of Southern California and is also the Director of the Tomas Rivera Policy Institute, a university research center.